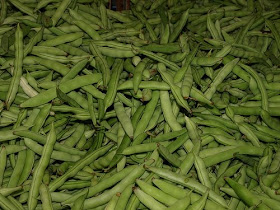 I seem to be getting a lot of hits on the blog from people searching for info on Greasy Beans. This is my first year growing them too so I've tried to collect as much info on them as possible.

Greasy beans are green beans that lack the normal fuzz that is on the outside of a bean pod. Because they lack that fuzz, when you cook them they take on a shiny appearance that makes them look greasy.

They seem to be indigenous to Appalachia, mainly Kentucky, North Carolina, Tennessee and West Virginia. They have names like: Cherokee long Greasy (from the Cherokee indians), Lazy Wife Greasy, Robe Mountain Bean and Ora's Speckled bean. Some of the histories are very fascinating.
Greasys are so prized in the mountain south that an Appalachian bride's trousseau would traditionally have included a few seeds from her family's unique strain of beans. Such devoted guardianship has produced an unmatched diversity of greasy beans in the North Carolina and Kentucky highlands, with more than 30 known varieties still cultivated on small patches of mountain land.
This year I am growing two varieties. Pink Tip Greasy (from N.C.) and North Carolina Speckled Long Greasy Cut Short.
These beans do need to be "unzipped" or un-strung. In today's world, demand is high for stringless beans thus contributing to the decline of these old family beans. When we grow these beans and save seed, we are preserving our history too. As most of you know, my passion is really with the heirloom tomatoes, but there are many vegetables that need protected and preserved. If you love gardening, help continue the legacy of our ancestors and grow these very special varieties.
Greasy's are very hard to find. Sustainable Mountain Agrigculture Center is where I finally found my seeds. http://www.heirlooms.org/catalog.html Along with preserving Southern Appalachian heirloom bean varieties, they are experts on the greasy bean.
My friend Maria at Blueribbontomatoes.com also has a family greasy bean she is growing and selling.
It makes me sad to think of the heirloom beans that might become extinct including many varieties of family Greasy beans. The old timers are passing away and if a family member doesn't continue growing their bean, it becomes lost along with all of it's history. Saving heirloom and family vegetables is right up there with me as saving an animal from extinction. Once something is lost, it's lost forever.
Tomatoaddict at 1:20 PM